Off Road and Outdoors: Poison Spyder and The Access Army Team Up!

Off Road and Outdoors: Poison Spyder and The Access Army Team Up!
No comments: 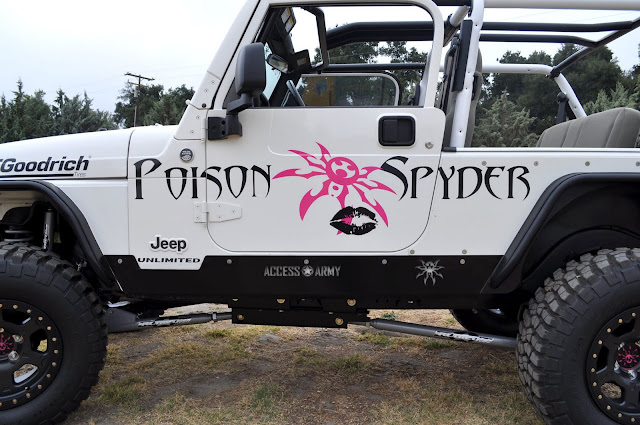 NOVEMBER 24, 2009 • BANNING, CA — Poison Spyder Customs has joined forces with the recently formed “Access Army” movement in the fight for recreational access to public lands. In an effort designed as both a fund-raising venture for the Access Army and as a way for members of the movement to show their commitment to the cause, Poison Spyder Customs is producing a limited edition Access Army version of its popular Rocker Knocker and Ricochet Rocker rocker panel protection products for Jeep vehicles.

The Access Army Rocker Knocker or Ricochet Rocker features the Access Army logo CNC laser-cut into the rugged 3/16” plate steel. Access Army Rocker Knockers are available with or without tubular rock sliders. Best of all, Poison Spyder Customs is donating 10% of the purchase price for each set to the Blue Ribbon Coalition, which fights the legal battles for public access. “We’re passionate about this issue,” says Larry McRae, president of Poison Spyder Customs, “access to public lands is what our sport is based on. We’re proud to be a part of the Access Army!”

The Access Army is guided by its Joint Chiefs of Staff, veteran land use advocate Del Albright, who brings a lifetime of experience fighting to maintain public access through such organizations as the Blue Ribbon Coalition and the California Association of 4 Wheel Drive Clubs. The Access Army brings together access advocates from all walks of life, and from across the spectrum of land use organizations, enthusiast associations and clubs. The Access Army seeks to exploit the power of the Internet, its online forums and enthusiast groups, and social networking sites to take the fight for access on the offensive with a proactive, targeted, aggressive campaign for public access to public lands.

To learn more about the Access Army, please visit their website at www.accessarmy.com. More information on the Blue Ribbon Coalition may be found at www.sharetrails.org. For more information about Poison Spyder Customs products, see www.poisonspyder.com.

ABOUT POISON SPYDER CUSTOMS: Poison Spyder Customs has been at the forefront of off-road innovation since its inception. From its Banning, California facilities Poison Spyder Customs designs, manufactures and markets a growing line of off-road accessories and performance modifications for Jeep® vehicles. The majority of its sales are made through an extensive dealer network, and the company maintains a high visibility among off-road enthusiasts through heavy participation in off-road events, clubs and online enthusiast forums.

For more information on this press release or its associated files and images, contact: 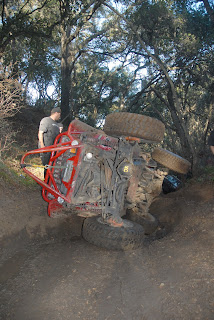 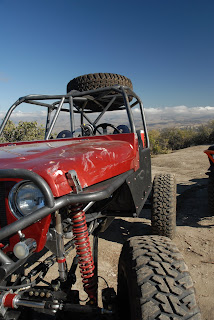 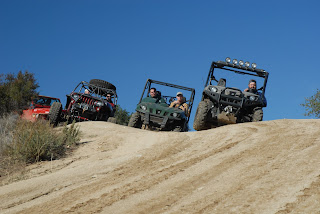 I like to go to new places and I was pleasantly surprised when we got the chance to hang out with old and new friends at Hollister Hills OHV area.  It was my first time to the area so I didn't know what to expect.

The weather was perfect with bright blue skies filled with puffy clouds and views galore from the hill tops.  Did I mention the great wheelin to be had there?  It's mostly gullies and trenches but still lots of fun and a great place to test out your suspension and flex capabilities.

Hollister has a riding area specifically for motorcycles and another for 4 wheelers so they stay out of each others way.  It was really a fun place and I look forward to going again.
3 comments:

From the desk of Del:


Pocatello, ID. (Nov. 16, 2009). BRC is pleased to announce the launch of very special Christmas and holiday season online auction designed to help us all save trails and keep our sports alive. This “Christmas Auction Project” is being supported by a huge variety of businesses who believe in BRC’s mission to provide leadership in responsible recreation nationwide.

The auction will officially launch Dec. 1st on eBay with our BlueRibbon account. All proceeds will help BRC continue to champion multiple use recreation throughout our great country. Items will be shipped directly to the winning bidder. All you have to do is bid. 

We are building our Christmas list of goodies for you to bid on and many more businesses are putting their elves to work to come up with more product to support this auction. But so far we have:

5 off-road Tires from BFGoodrich with the set of 5 Monster Beadlock Raceline Wheels by Allied.

And we’re just getting started. Save up some bucks and get ready to bid.

As we get more goodies on our list, we’ll let you know. We cannot thank enough the businesses who are bagging up products for BlueRibbon and bringing a special cheer to our holiday trail-saving season.

Hump N Bump, come on out next year!

Here's a video about our trip to the Hump N Bump event out in Logandale Nevada.  We hooked up with the Gen Right team and Nicole Johnson and had a great time in the red rocks of the area which features anything from mild to wild!

Sandberg Snowmobile Ski Covers rolls out the Ski Defender cover just in time for the 2009/2010 snowmobiling season. Ski Defender covers, proudly made in the United States of America, are designed to protect snowmobile skis while your snowmobile is being stored during the summer and between rides in the winter - a perfect way to protect your skis from the harsh UV rays of the sun and the ever changing climate. 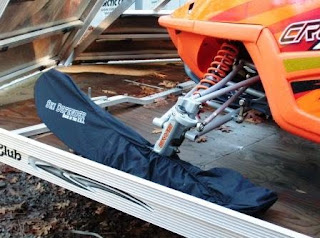 Exposure to UV rays, coupled with hot temperatures can lead to hairline cracks and fading of snowmobile skis. Hairline cracks weaken a skis overall endurance and stability. A cracked ski during a ride can mean disaster! In this economy, who doesn't want to protect their investment?


Ski Defender ski covers are made from a durable, but lightweight, UV and water resistant breathable nylon material. They have been designed with an elastic enclosure for a snug fit almost all OEM and aftermarket skis.

US, Mexico, Canada To Cooperate on Wilderness Conservation

US, Mexico, Canada To Cooperate on Wilderness Conservation

The team from GenRight kicked in some diesel bucks to help keep us on the road doing our land use stuff.  Thanks Tony Pellegrino and the team.  We look forward to working more with you in the future. 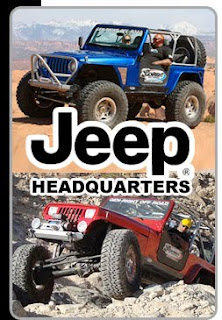 They sure do make some kick butt stuff too especially if you have a YJ but they do TJ stuff too so go check out their stuff:  http://www.genright.com/

Come out next season and see the W.E. Rock season opener in March at the Urban Assault OHV Combat Zone.  CalRocs will hold their season opener there too in May, so come on out and join us and catch a little bit of this action:
No comments:

Here it is folks!  Sorry, links don't work as I'm not a member of Green Wire.

The memorandum of understanding, signed during the WILD9 international wilderness congress, is the first continental wilderness agreement.

"This agreement will make it easier to exchange successful experiences and facilitate monitoring and the training of human resources, as well as financing projects that will protect and recover wilderness areas," Mexican President Felipe Calderón Hinojosa said Friday in his welcome to the congress, which meets every three to four years.

The agreement, a year and a half in the making, will allow land managers on opposite sides of the border to more easily work together on management challenges and opportunities, regardless of jurisdiction, officials said. For example, federal land managers will no longer be restricted in their collaboration with state or provincial managers across the border.

Mexico's participation in the MOU is part of a multipronged effort to step up wilderness protection at home, said Ernesto Enkerlin-Hoeflich, who heads the Commission for Natural Protected Areas for United Mexican States, a government agency.

The Calderón administration has been pushing for a wilderness law, similar to the one adopted by the United States in 1964, and the new measure has wide support among federal lawmakers in Mexico, he said. Currently, the only wilderness area in Mexico is the El Carmen Wilderness, created by CEMEX Corp. It borders Big Bend National Park in Texas.

"We are coming late, but I'm sure we're going to pick up fast," Enkerlin-Hoeflich said.

Collins' office promotes the nonextractive benefits of natural systems, such as providing clean water, preventing erosion and helping to regulate the Earth's climate. Collins signed the document in place of Agriculture Secretary Tom Vilsack, who could not attend the WILD9 meeting.

"Wilderness forms the essential core of protected areas, but wilderness alone will not suffice," Hamilton said. "These areas must be connected."

Hamilton and his co-signers acknowledged that the border fence recently erected along long segments of the U.S.-Mexico border is a hindrance to that connectivity and will pose challenges to achieving the goals of the new agreement. Enkerlin-Hoeflich spoke of Mexico's "deep concern" about what he called "the wall" and expressed hope that the wilderness MOU will focus further attention on the need to create cross-boundary passageways for wildlife.

"We have to make the best of what we've got," Hamilton said.