I can't say enough about the Southwest Crawlfest held just outside Hurricane Utah; a few short miles from the city of St. George.

This event is a hit in my book and we will surely put it on our calendar for next year.  There is no registration fee and the only thing they request is to purchase your dinner on Saturday night and buy raffle tickets for their outstanding list of goodies up for grabs.

Scenery and comraderie were some of the things on top of the list for entertainment during the weekend including trails that range from mild to wild.  We saw every sort of 4 wheel drive vehicle out there enjoying the routes regardless of their shape, motor or tire size.  All were welcome.

Last but not least, Crawlfest is a benefit event for the land use organizations and the money raised, less expenses etc., will be sent to them including the BlueRibbon Coalition.

Thanks to all who were involved in putting this wonderful event togther and I'm certain this will continue to be a success and grow bigger year after year.

Be sure and check in at:  http://www.southwestcrawlfest.com/ 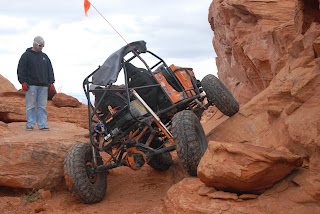 POCATELLO, ID (January 22) - On January 15, 2010, Southern Region Deputy Regional Forester Jerome Thomas adopted the recommendation of the internal Appeal Reviewing Officer and denied the Upper Tellico OHV Area appeals submitted by the Southern Four Wheel Drive Association (SFWDA), United Four Wheel Drive Associations (UFWDA), and the BlueRibbon Coalition (BRC). "We are disappointed but not surprised by this outcome," observed Jay Bird of the Rescue Tellico Committee and Past President of SFWDA. "This was a mandatory step in an ongoing process, and it would be unusual for an agency that has been for years locked in on the outcome of closing Tellico to reverse course at the last step of the administrative process," added Greg Mumm, BRC Executive Director. "We remain committed to restoring some form of meaningful vehicle recreation at Tellico, will carefully review the appeal decisions, and will take appropriate next steps," Mumm concluded.

The BlueRibbon Coalition is a national (non-profit) trail-saving group that represents over 600,000 recreationists nationwide The Combined Federal Campaign (CFC) season is beginning. Federal employees, please mark BlueRibbon Coalition and Check #11402 on your CFC pledge form to support our efforts to protect your access. Join us at 1-800-258-3742 http://www.sharetrails.org
No comments:

The New Year!  Yeah, it's here already and what an awesome start.  I'm so looking forward to the beginning of the rock competitions and events.

The last week of January we'll be headed out to St. George Utah for the Southwest Crawl Fest.  This is going to be an awesome event in the most beautiful red rock country around.  Then we'll be off to Quartzite for a little rock hounding for a few days.

The beginning of February will find us headed down to Johnson Valley for the famous King of the Hammers race.  It will be a week of wheelin', visiting and spreading the land use message to all who will listen.

Whew!  Then we come home in time to go to CA4WDC annual Convention in Sacramento CA on February 19-21 at the Double Tree Hotel.
No comments: