Once again the crew over at the Cal-Neva Extreme Rockcrawling series in conjuction with Yukon Gear & Axle announces their season opener May 19-20 at the Giant's Throne at Reno Nevada's Exit 28.  Several teams will be competing in what promises to be a banner year for Cal-Neva Extreme as the event rolls into it's third year.

"Putting on a comp up at the Giant's Throne is awesome because of the natural terrain that promises to make it especially difficult and challenging for even the best drivers" said Glenn Bonner, President Cal-Neva. 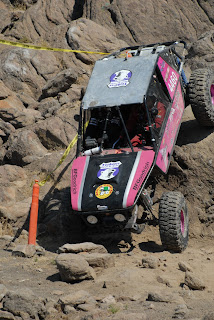 The rugged natural terrain at the Giant's Throne makes it a challenge to get through the tight courses and challenges any driver.  ﻿

Stock classes to Pro Mod are available so nobody gets left behind if they want the chance to compete in a W.E. Rock sanctioned type of event.

CRAWL Magazine's very own Wendy Nickell with her spotter Brandy Southall will once again take to the rugged terrain and show 'em how it's done.

"I had a great time last year and I've been working on my moves for the upcoming season and I'm looking forward to it" said Wendy, "considering last year was the maiden voyage for Project Wendy and my first ever competition we did really well!" she added.

For more information, dates and locations check out their website at www.cal-nevaextreme.com

This year's Hump N Bump in Logandale Nevada once again proved to be a success and provided lots of fun, scenery and off road enthusiast comraderie!  Put on by the Vegas Valley Four Wheelers and friends the Hump N Bump is a bucket list item. 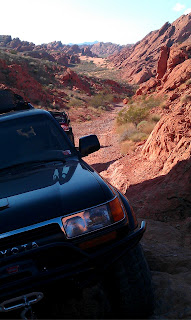 "Elsie" coming through one of the washes with incredible scenery.
The wheelin in Logandale is anything from mild to wild with several opportunities for casual crusing and checking out the wonderful views and wildlife.  If you're lucky you may catch up to a desert tortoise like we did a few years ago.  What a wonder they are to watch, and be sure to just watch them and take pictures only as it's illegal to handle them.
We've also encountered big horn sheep which majestically hopped down the mountainous terrain and paraded themselves rightin front of our Jeep, what a sight that was!

It's not hard to find awesome photograph spots in Logandale!  The red rock scenery is one of my favorites and makes our rigs look great out there in the desert! 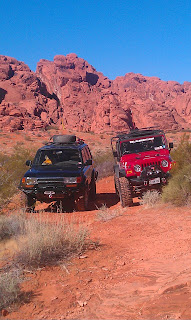 The "Land Use Warrior Machines".
This year I won the contest for picking up the most garbage and returning it to camp for disposal.  Good thing this little guy hopped out of an empty can before I tossed him into the dumpster!  For awhile he decided to live in the "Elsie".  My buddy finally decided to come out and take a peek whileI was working my way through some pretty nasty crevices.  Good thing I don't panick or both of us could have been in trouble on the trail that we were on! 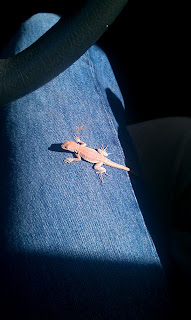 
All in all this is a good event for the whole family and has a growing raffle every year and I won't even tell you about the BBQ dinner they put on Saturday night!  This is mouth watering stuff for sure.  Keep up with the latest and the new dates for the 2012 event here:  http://www.vv4w.org/﻿
No comments: