CalROCS 2010 championship proved to be more than exciting with all the teams fighting to keep up the points and standings throughout the whole weekend and the crowds that showed up to see the carnage were impressed.
Teams from as far as Canada and Virginia came out to test their skills and try their luck at the season finale at the beautiful Donner Ski Ranch in sunny California. 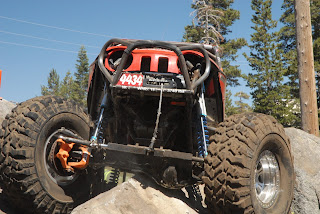 Justin Hall from Team Rockhard showed up in his new Unlimited Class buggy and showed off his driving skills while his dad took on the challenge of hopping around the course spotting his son on some amazing drops and crevices that were a part of the bonus lines. 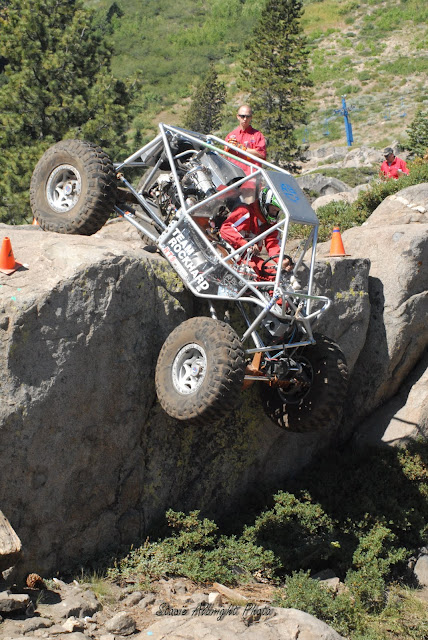 Good job Justin for taking first place in the Unlimited Class!  A great win considering it was only his third  time driving the new rig.
Be sure and check back for the dates for the 2011 season of CalROCS!  http://www.calrocs.com/
No comments:

A Close Call On The Freeway!

The event 'Sierra Trek', held at Meadow Lake near Truckee CA is awesome and I recommend putting it on the bucket list!   After packing everything up in the Jeep trailer and making our way down the hill we ran into trouble. The trailer hitch somehow broke off  when we were doing about 60 mph downhill on I-80 in Sunday traffic.

I just happened to look in the rear view mirror to see something shiny bounce down the freeway and almost hit the semi truck that was following us! It didn’t register in my head what that could have been and I was just about to say, “pull over” when the trailer snapped off the Jeep and swung around to the driver's side in the other lane! The safety chain held and before I knew it the Jeep swung hard to the right hand side of the freeway, luckily there was a big emergency lane and then a wide shoulder area. We hit the dirt, went up the bank and couldn’t stop; we lost control, came back down hard onto the freeway and started doing 360's downhill!

We couldn’t see anything but a big dust cloud that we kept rotating through. We got pelted with pebbles and a huge wave of dirt. I thought for sure we were going to get rammed by the semi truck as all I could hear was the screeching of brakes and skidding on the pavement, it was a really ugly sound. I was petrified and I was thinking about how well the roll bar would hold up if we started to roll; all I could do was hold on and wait, those seconds were very long ones!  We had no idea where we were stopped as the dust and dirt hung in the air for what seemed like forever. Finally I realized we were on the right shoulder and thankfully out of the way of downhill traffic. We did two full turns, which seemed like 10, and ended up facing traffic when we finally stopped. I didn’t worry about rolling so much as I did by the thought of getting plowed by the semi truck! I would have taken a direct hit!

Amazingly the Jeep stayed upright!  I think it was because of our Raceline Monster Beadlock rims that didn't bust a bead while we were rotating round and round down the freeway!  After I composed myself our buddy at Raceline got a "thank you" call!

The trailer ended up jackknifed on its side and stuck up under the back bumper.  I thought for sure that all the stuff in the trailer was going to be all over the freeway and if that were the case I really didn’t care, we weren't the new hood ornament on the semi! The only thing that came out of the trailer was the five gallon water can (far bottom left corner)! That was a heck of a pack job! 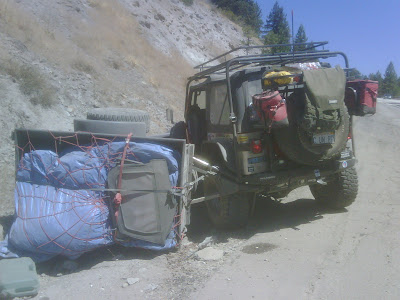 This is the Jeep facing uphill traffic on I-80 after we finally stopped, Whew, what a ride that was!

The semi truck pulled over with one other car and the drivers came running up to see if we were okay. The truck driver was amazed that we didn’t get killed as he watched the whole thing happening and later told me that he had never seen anything like that in his 20 years of driving truck. He gave Del and I a high five and told Del he had amazing driving skills to have kept us upright and out of the main traffic which is what saved our lives. The CHP finally showed up about a half an hour later and I overheard one of the old timers say, “I see we have a lucky one here today”.

Some acquaintances from another club were coming down the highway returning from the same event and immediately pulled in to help get the trailer upright. They just happened to have a spare tow bar for a trailer and stripped the old bent parts off and replaced them with their stuff. They even had a spare ball hitch but it was too small so we broke out the on board Ready Welder and they put a weld inside the hitch to make it fit and viola we were on our way within about 45 mins. They even took the time to pull over with us at the next exit to check if everything was working okay with the “trail fix” that they did. The off road community is really a great network of people that go over and beyond the call of duty to help a friend or acquaintance in need.

We were both covered in dirt and dust in places that I’m not sure how it even got there and we later discovered there were pebbles in our seats from all the debris flying through the air when we were spinning through the dirt. Whew, that was a close call and we were very, very lucky. It was also a reminder to check your vehicle and equipment before hitting the road.